Getting Down to Ghor

Liz and I had the great pleasure this past weekend to visit the project site of the other organization we’re interning for this summer, Al Numeira Environmental Association. Meeting William, the main honcho of the group, and his family was a real treat. We stayed in the guest house, their “Harmony Center,” which is made from traditional, natural materials like mud and clay. His family was especially welcoming and warm, and if it weren’t for the extreme heat in the middle of the day this time of year, I think it would have been nice to work from Ghour this summer.

We arrived after making our way by bus from the South Bus station. While we were waiting we made conversation with the driver, Abdel Karim and another young shab who was on his way to Ghor. We were concerned a little about finding our way from the directions provided on Al Numeira’s website, but William’s house/the Harmony Center were incredibly easy to find. Abdel Kareem also knew where the house was, telling us he always wondered why there were ajaneb kateer (a lot of foreigners) at his house. The other thing that made finding the house so easy was noticing all the trees and plants growing around their property, especially in comparison to the surrounding house. It stuck out like a sore thumb!

The garden/farm around William’s house is ingeniously designed to make the most of the little rainfall Ghor receives (less than 75mm annually), and the greywater recycled from household use. After spending the afternoon napping and relaxing during the hottest part of the day, we spent Friday evening getting the full tour of the house’s retrofit plumbing and the garden’s irrigation system. While Liz and I don’t have a lot of expertise in this area, we were blown away by the simplicity and intuitiveness of the design. For example, the shower has two drains built into the floor, one for “blackwater” and the other for “greywater,” the difference being the use of soaps and shampoos making the water unsuitable for recycling. The idea is so simple – want to take a full shower? plug the greywater drain. Just rinsing off? Greywater it is! In the kitchen, the situation is a bit different, and Basma (William’s wife) simply usesnatural soap to wash the dishes. There are also hook ups to the outdoor sink and shower connected to the Harmony Center and the other kitchen and bathroom used by Abu Malik’s (William’s father) part of the house.

With Al Numeira director William (third from left) and volunteers

We also had the opportunity to tour the girls’ school were Al Numeira constructed a similar greywater garden in the outdoor area. The group of young men who volunteered to help build the project met us there in the evening and talked about the work and the success of the project. William showed us around the site and talked about the progress they made, their hopes to expand the project even further in the back part of the school lot, as well as their frustrating efforts to convince the school principal and teachers of the benefits of having an outdoor classroom and the kind of real-world instruction it can provide.

On the way back from the school, Basma suggested that we get out and walk since the weather at this point in the evening was bjennen (very beautiful; lit. “makes you crazy”). While we were walking we were called over be a group of women sitting outside while some men in their family were shoveling concrete to make a veranda, or so they said. The kids wanted us to take their pictures, and another older man came out from behind the wall wearing these big green mad-scientist rubber gloves and pretended to scare us in a good-natured way. They wanted us to sit and stay for dinner, but Basma politely declined for us. Itwas a pleasant reminder how friendly people can be in Jordan…

The next morning, William took the whole family with Liz and me, as well as one of the young volunteers, Hussam, to visit Wadi Numeira. The experience of hiking in the canyon-like wadi was incredible – the high steep walls fading in an out of reds, purples and browns, the quiet serenity of the trickling creek made for a very peaceful atmosphere. With the exception of one major detail: the first quarter mile in was littered, littered with trash. Plastic bottles, bags, wrappers, food scraps, you name it. It was sad to see such a wonderful place so ill-managed, but as Hussam pointed out, the Ministry of Tourism in Jordan only manages so many wadis, and once people start littering, there’s a mindset that a little more trash won’t make much more of a difference. There’s not exactly a strong “leave no trace” ethos among the average Jordanian. William, Liz and I talked about organizing a trip with study abroad students to volunteer to help clean up the wadi one day this summer – hopefully we can make somethingl ike this happen for Al Numeira.

William also took us to the opening of another wadi, Wadi Asaal, to show us where he envisioned having an eco-tourism center which used permaculture irrigation to grow food, trees, and beautify the surrounding land. He’s got big dreams, this guy.

Saturday, after our obligatory siesta in the afternoon and an early evening meeting with more members of the Association, Liz and I were happy to just lazy around and enjoy the green shade, play with William’s personality-filled kids and help prepare the appetizer of watermelon and “white cheese” – a kind of feta-salty goat cheese. William’s sister made dawali for us for dinner, a version of stuffed grape leaves steams over chicken with pickled lemon, onion, spices, etc. It was honestly the most delicious homemade meal I’ve had in Jordan. Ever. Yeslam ya deki! Peace on your hands!

All in all, it was a pretty eye-opening and spectacular visit. It made us both hyped about helping Al Numeira polish their image, apply for grants and start building partnerships to better work towards their mission. Weeeeeee-ooooo! 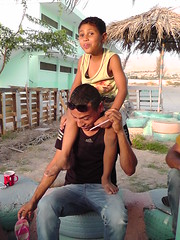